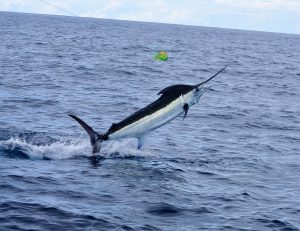 This is the king of all sport fishing, the top of the food chain. Anglers pursue Marlin all over the world from Central American to Australia to Africa. In the waters around Drake Bay and the Osa Peninsula we are lucky enough to have 3 species; Striped, Black and Blue Marlin. The most common Marlin caught here are Blues between 200-300 lbs. One lucky angler on the Reel Escape caught a 550 lb Black after a tough 4.5 hour battle. The Reel Escape has all the big game fishing rods, reels and fighting chair needed to fish for these magnificent species. We practice catch and release of all Marlin caught by Fish Drake Bay. 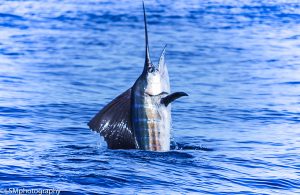 The Sailfish is one of the most sought after Billfish in the world because of the incredible jumps it makes after being hooked. They are also considered one of, if not the most beautiful fish in the world. Southern Costa Rica is one of the best places in the world to catch big Sailfish in good numbers. The Offshore World Championship is held every April in Costa Rica, thousands of Sailfish are caught and released during this four day event. The Reel Escape is a regular competitor in this prestigious event. The Pacific Sailfish is much bigger than the Atlantic Sailfish caught in Florida. It is not uncommon for us to catch them as big as 125-150 lbs. From February-April you may see up to 15-20 hookups in 1 day. 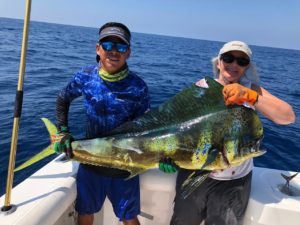 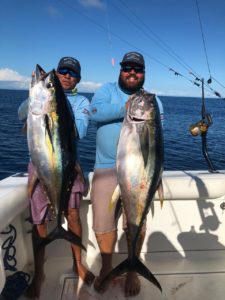 A favorite fish for sushi and ‘steaks’ worldwide. We are fortunate enough to have a healthy population of these incredibly strong and beautiful fish in our waters. Tuna are in Drake Bay year round and can reach speeds up to 75 mph. The Reel Escape keeps soy sauce and wasabi on board for those clients who want to eat the freshest sushi they will ever eat immediately after getting the Tuna on board. 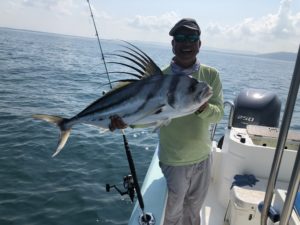 Drake Bay is one of the best places on Earth to catch this beautiful and exotic species. In fact, we catch a lot of fish about 20 minutes from the bay. We not only catch a lot of Roosterfish but plenty of big ones as well. We feel the record of 110 lbs has a good shot of being broken here in Drake Bay. Roosterfish are only found in the the Eastern Pacific from Baja, California to Peru. It is named a Roosterfish because of their seven very long spines of the Dorsal Fin which resembles a Rooster Comb. Roosterfish are great fighters and a ton of fun to catch but are not very good table fare. At Fish Drake Bay we practice only catch and release of these beautiful fish. 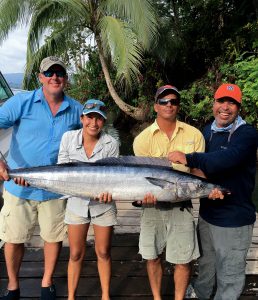 Wahoo or Ono, as they are called in Hawaii, is a prized game fish due to its high quality filets. Wahoo are caught while high speed trolling with either a lure or ballyhoo. Many times Wahoo are confused with Barracuda as they are similar in color and body style. Wahoo are fast swimmers and have razor sharp teeth. 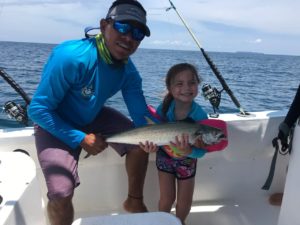 A close relative to the Spanish Mackerel and the King Fish, the Cero Mackerel are common in the waters of Drake Bay. Cero Mackerel are generally caught while trolling near the beaches and river mouths. They weigh anywhere from 5-25 lbs and are delicious grilled or blackened.

We are fortunate enough to have many species of Snapper including; Cubera, Rock, Red, Black and Yellow Tail Snapper. Similar to the Grouper, they are rock dwellers, hard fighting and delicious to eat. 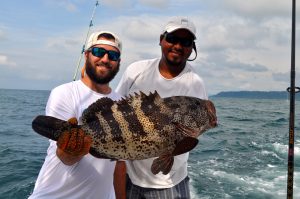 We have various species of Grouper in the Osa Peninsula including; Black, Gag, Broomtail and Panamanian Grouper. They may have different coloration but they are all hard fighters and delicious to eat. You catch these bottom fishing around Caño Island. We use both live bait and cut bait to catch Grouper. Once hooked, it is important to remember the angler much pull them out of the rocks as soon as possible.

A.J.’s as they are commonly called here in Drake Bay, are a hard fighting and tasty fish that generally live near the bottom. They have a distinctive black stripe extending from their nose to the front of their Dorsal Fin giving them the appearance of wearing eye make-up.

Pompano are also rock dwellers and are considered a delicacy. There are 20 different species of Pompano and they are very similar to a Permit. In Drake Bay the African Pompano is the most common. The Pompanos in Costa Rica are about twice the size of fish caught in the Gulf of Mexico.

The best fishing requires a great boat and captain – for Southern Costa Rica  Sailfish, our charter service is the best.